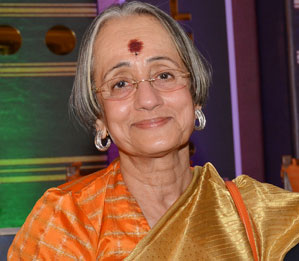 Dr. Pragnya Ram has been associated with the Aditya Birla Group for a long time. As the Group executive president, Corporate Communications, Dr. Ram has been actively involved with the group's community initiatives. She has a strong academic background, with a Ph.D. from Bombay University and Masters degrees in History and Sociology. She was awarded the Sir Phirozeshah M. Mehta Scholarship during her Masters programme. She also holds a postgraduate Diploma in Journalism from the Bombay College of Journalism and is a recipient of the Patanjali Sethi best writer award. Dr. Ram began her career teaching at the Elphinstone College, Mumbai, and Stella Maris, Chennai. She has also taught at management institutes like S.P. Jain Institute of Management and Research and Chetna College of Management, Mumbai. 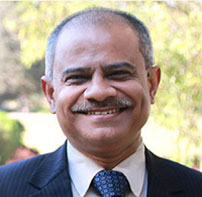 Mr. Santanu Das has been a friend and facilitator to his students for over three decades now. Before joining Sarala Birla Academy as the Principal in 2009, he headed the Assam Rifles Public School, Shillong and the Aditya Birla Public School, Renusagar.

Mr. Das did his schooling from St. Joseph's Academy, Dehradun, has a Master's in Physics and a Diploma in German from the Visva Bharati University, Santiniketan, a Bachelor's in Education from the Annamalai University and a Master's in Business Administration from the Symbiosis University, Pune. He has attended courses at the IIM - Kozhikode, PTC - London, The Haas School of Business, University of California - Berkeley and the Harvard Graduate School of Education.

He has worked as the Regional Supervisor and the Chief Nodal Officer for the Central Board of Secondary Education, New Delhi and as a member of the School Affiliation Team for the CBSE. Currently, he is the President of the Karnataka ICSE Schools' Association - KISA, the Vice President of the Indian Association of Adolescent Health - Karnataka and a member of the CII National Council of Education. He is a voracious reader and is fond of debates, planning and anchoring quiz shows (in 2013 he was the Quiz Master for the National Finals of the CISCE affiliated schools of the country), writing short stories, amateur videography and writing and directing plays.

He loves travelling and has gained from his visits to, and interaction with, many schools in Asia, Europe, North and South America, New Zealand, the Middle East and Africa. 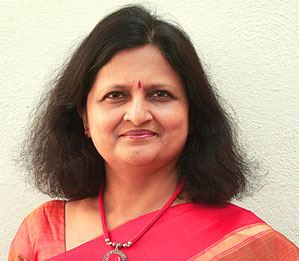 Mrs. Vani Pratap is the Chief Financial Officer (CFO) and Business Administrator of Sarala Birla Academy (SBA). She is a member of the Senior Management Team at SBA, since inception and was a member of the core committee, that established the school. She heads the finance, administration and business operations of the school. She has over 25 years of experience in the Corporate Finance and Investment Banking sectors.

Mrs. Vani started her career with the Industrial Development Bank of India (IDBI), Mumbai, where she worked for 10 years in the project finance and merchant banking areas. She then moved to Ernst & Young, a multinational accounting and auditing firm where she was Vice-President, Corporate Advisory Services, and handled several assignments in public sector disinvestments, corporate restructuring, private equity and mergers and acquisitions.

Mrs. Vani has a brilliant academic record and was a University Topper in her BCom degree. She is a Chartered Accountant and a rank holder in the CA final examination. She was awarded four gold medals by the Institute of Chartered Accountants of India for her exemplary performance in the Chartered Accountancy course. She was also honored with a special prize for being the best lady candidate in the country.

After her move to the education industry, she has taken keen interest to equip herself with the dynamics of the education space and has become a keen learner herself. She was awarded a Certificate of Business Leadership in International Schools by PTC, USA, making her a forerunning finance professional in the education sector. She has kept her quest for knowledge acquisition going and has completed a course in Theory of Knowledge (TOK) from the Oxford University, London and the ILMP Senior Leader Programme from Fieldwork Education, UK. She teaches TOK to the students of IB Diploma Programme.

She has co-authored a book on ‘Long Term Debt Financing’ and visits institutes and colleges of higher education, to speak to students on topics of professional interests. 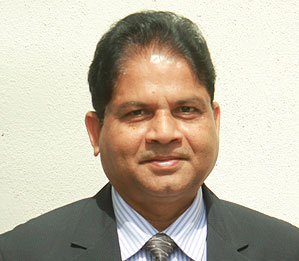 Mr. Felix Sanctis hails from Mangalore, Karnataka. He joined SBA in 2005 and was appointed the Academic Coordinator in 2006 with the responsibility of overseeing the ICSE, ISC and CAIE curricula and now has been elevated to the position of the Headmaster. He has 24 years of rich experience in teaching and administration.

Prior to joining SBA, Mr. Sanctis was the Prefect of Discipline at St. Aloysius’ Day & Boarding School at Kolkata. He has also served as the head at St. Anthony’s High School at Kolkata, at St. Peter’s High School, Kolkata and also at Mallikarjun Public School, Pithoraghar - Nainital. He was also a member of the Managing Committees of many renowned schools in Kolkata.

Mr. Sanctis has a Masters degree in History from Kolkata University, in English from Kumaun University and in Political Science from Annamalai University. He has a Bachelors degree in Philosophy and Education from Kolkata University. He has a Cambridge International Diploma for Teachers & Trainers and a diploma in Computer Applications & Software and a certificate in First Aid Medical Course. Besides the administrative and leadership responsibilities, he also teaches History to IBDP students, Political Science to ISC students and Value Education to junior students at SBA. He believes that the goal of education is to achieve ‘fullness of life’ and that imbibing and living the three dimensional values - divine, human and social, is the right path to attain excellence.

Mr. Sanctis is fond of reading self-help, philosophical, religious, leadership and counselling books. He has conducted many motivational workshops for teachers and students and counselling sessions for the youth. He is fond of basketball and has played for the college team during his younger days. He likes playing Volleyball as well. He proudly recalls his fond memories of preparing the students and participating in the Model United Nations across the country. He has attended various national and international workshops and seminars conducted by the CIE, IBDP, TAISI, CISCE and other educational foundations. 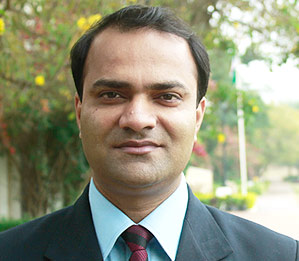 For almost two decades, Mr. Sudip Mukherjee has touched the lives of hundreds of students. He started his career in DPS (Digboi); and, based on his impressive performance there as a Teacher, Housemaster, Athletic Coach, CBSE Centre Coordinator, Coordinator (Adventure Sports) and panel member for teacher selection, was inducted into the SBA Faculty in 2006. Since then he has continued working in those capacities here and, in addition, also as a Resource Person, DP-CAS Coordinator and HOD (Humanities). As a recognition of his excellent all-round contribution in all spheres of school functioning, he has been inducted to the SBA School Leadership Team as the Assistant Headmaster responsible for the CISCE Curriculum, Residential Life and Pastoral Care.

Mr. Mukherjee did his Masters in Geography and a Bachelors in Education from the Gauhati University. He has pursued CIDTT from the Cambridge University and attended courses in Disaster Management (IGNOU) and training programmes under the aegis of the CISCE, IBO and the Australian Boarding Schools Association (ABSA). He has brilliant academic, co-curricular and extra-curricular records since his schooling days. He has a number of citations and awards to his credit from organisations such as The Energy and Resources Institute (TERI-New Delhi), The Indian Centre for Wildlife and Environment Studies in South Asia Region (Jaipur) and The Deutsche Gesellschaft für Internationale Zusammenarbeit (GIZ), Bonn. Under his stewardship the students participated at TERI’s National level film contest on ‘Climate Change’ with one of them being acclaimed the national winner in 2012. In 2014, the GIZ was granted copyright of his work on “Education for Sustainable Development (ESD)” for the ‘ESD Expert Network’ which is used as a “Resource Toolkit for Teachers Training” by the participating member countries on “Education for Sustainable Development (ESD) – Germany, India, Mexico, South Africa” to assist trainers for ESD and to provide them with resources for their teaching practices.

He has taught across the boards and curricula for CBSE, CISCE, CAIE and the IB. He has immense experience of being an examiner for the CBSE and ICSE board examinations. At present he is a veteran examiner as well as an IA moderator in Geography-HL for the IB examinations. He has contributed significantly as a core team member for the authorisation process of the IBDP at SBA and also at the five-year review process. Both learners and educators have gained immensely from his workshops, held at CISCE affiliated schools as well as at forums like the SAIBSA.

He has undergone training at HMI-Darjeeling and has also led teams of students to HMI on three occasions. He has also led them to various other adventure destinations in India and abroad. Himself being a NCC U/O and SGFI level athlete, he has always been engaged in grooming the young students into disciplined, confident and self-motivated individuals.

He believes in making learning an experience of joy in relevance to the changing dynamics of the 21st century. In the process, he passionately nurtures young minds towards their holistic development in becoming humble, compassionate global leaders who would be deeply rooted on the principles of ethics, humanity and camaraderie.